Notes from the Intern: Outside Art!

Since the afternoon weather had taken a surprisingly nice turn and the previously planned art project had the potential to be very messy, the Cook Arts Center Drop-In-Art class had the experience of doing art outside last Thursday.

The other volunteers and I loaded our arms up with paper, straws, and cups full of various colors of paint. The kids begged for me to tell them what we were going to do, but I refused to spill my secret. Instead, they shouted out what they thought we were going to do. Their ideas ranged from painting the grass to painting themselves. Thankfully, I was able to steer them away from both of those ideas.

I gave everyone a sturdy piece of paper, a paint color, and a straw. After emphasizing that they NOT inhale, I told them that we were going to be doing blow-painting. By dipping the straw into the cup of paint, they could then blow the paint out of the straw and onto their papers. The kids passed colors back and forth eagerly—adding more and more color to their paper.
Personally, I think that the sign of a good art project is when the kids start exploring on their own. And that is exactly what they did. After making sure that it was ok with me, Gregory started flicking his straw onto the paper, Erika started blurring all her paint together, and Shadaa started adding globs of paint on to her project.

Comments like, “That is so cool!” and “How’d you do that?” were being tossed around easily among us. They then began explaining to the others what they were doing. It was great seeing the paintings that came from this project but also the response that the kids had. Not only were they encouraging to each other, but they also took pride in their own work.

Of course, the project proved to be very messy. By the end of it they had paint all over their hands, faces, clothes, and even their hair. But it was worth every drop of paint I had to clean off of my own hair and clothes. 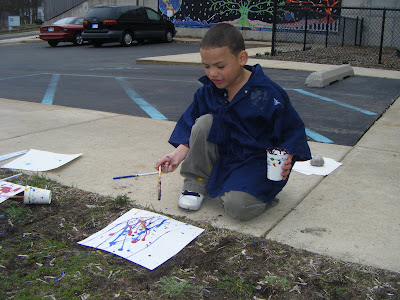 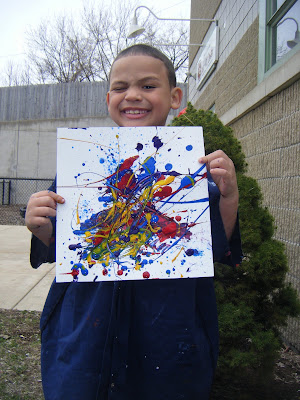 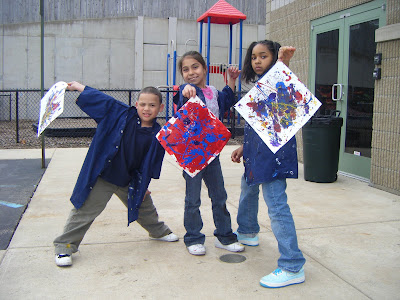 ** Shelly is a senior at Calvin College majoring in English and Studio Art. She shares her experiences interning at the Cook Arts Center on this blog once a week. **