Notes from the Intern: Interview with a Volunteer 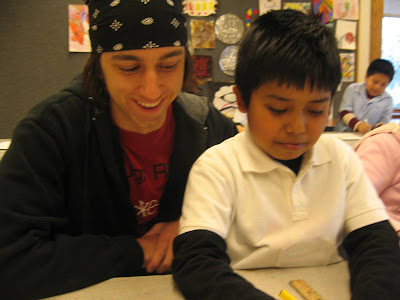 Shelly: Jack, tell us a bit about yourself. Where are you from? What do you like to do?

Jack: I am Jack Organ from Kent, Ohio. I am an Art major, Spanish minor at this point, and I enjoy running, climbing trees, playing soccer, watching movies, romping around with kids, and living in God's light.

Shelly: You’ve been volunteering with the Cook Arts Center since last October. Why do you volunteer?

Jack: My volunteering at the Arts Center began as a thing to do to earn credit for my Spanish class, but after a few months, I began to form relationships with the kids and really enjoy coming and working with them as opposed to checking the clock to see how much time I had left to be there. I love being able to see kids once a week since it's one thing that I really miss in college besides having a pet. It lets me connect with my younger self in a way that will hopefully positively influence these kids. Plus, it's really fun to see how surprised and impressed they are when I can speak to them in Spanish.

Shelly: What is your favorite part about volunteering at the Cook Arts Center?

Jack: My favorite part about volunteering might be giving piggy-back rides when we walk from their school to the Arts Center. It makes me feel very much like the college students I used to climb on and run around with when I was in grade school, so I feel like I'm bringing that joy to a younger generation and then one day, they can pass it on again.

Shelly: Do you have a specific memory that sticks out for you?

Jack: My favorite memory revolves around a little guy named Jeremy. He showed up to the pottery class I had been helping out in, a class where he was going to be the youngest kid. He was very shy and very attached to his sisters and he clearly didn't want to leave them, but did so with some persuasion. For the first month or so of our interaction in the class, he only nodded as a form of communication. One day, I asked him if he wanted to put his name on his clay piece and he handed it to me and began to sign his name to me. Then, a few weeks after that, I was trying to help him clean up and I asked him if he wanted to wash his hands. He looked at me and, very clearly, said "Yes." That was my favorite moment.

What are your thoughts on the Arts Center?

Jack: I love what the Arts Center is doing in that they are trying to give kids in an urban neighborhood a chance to develop useful skills that they can use now or later in life. I love the staff and other volunteers and I am so glad that I signed up to volunteer at the Arts Center last fall in my Spanish class.

** Shelly is a senior at Calvin College majoring in English and Studio Art. She shares her experiences interning at the Cook Arts Center on this blog once a week. **

Posted by Grandville Avenue Arts & Humanities at 8:42 AM