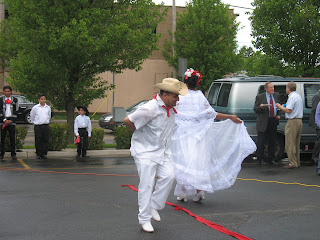 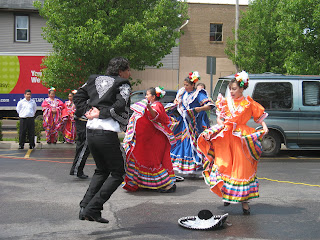 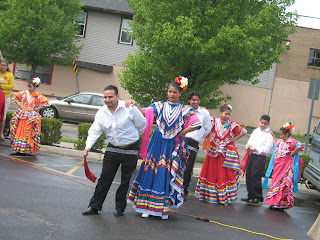 Grupo Tarasco, the dance company of the Cook Arts Center, was very busy with multiple Cinco de Mayo performances around the Grand Rapids area today. The day started out with a morning performance at Ottawa Hills High School and continued on to dancing at El Sombrero restaurant on Bridge Street and finally concluded with another school performance at Immaculate Heart of Mary School.

The holiday of Cinco de Mayo, which is celebrated on May 5th, commemorates the victory of the Mexican militia over the French army at The Battle Of Puebla in 1862. Many people often think that the Cinco de Mayo celebration is related to Mexico's Independence Day which is actually celebrated on September 16. Instead, Cinco de Mayo recognizes the win at The Battle of Puebla at a critical time in Mexico's history. After finally gaining independence from Spain in 1821 The Battle of Puebla was a momentous occasion and established national unity.
Posted by Grandville Avenue Arts & Humanities at 4:51 PM